The beginning... sort of

I was never a runner. Oh, I played sports in high school like millions of other kids, and I'd say that at that point in my life I was fit, but running was something I did as part of something else. Not on its own, because really, what's the point of running over there just to run back over here and waste time (or so I thought back then)?

Keeping fit with an 18-year old body was a whole lot easier than it is now, almost two decades later. Add in work stress, social life commitments, going back to school, and a little bout with thyroid cancer that threw my metabolism out of whack, and I felt like was a fatty. Sure, I wasn't morbidly obese, but I certainly wasn't happy or healthy.

My friends would decide to do something strenuous, physical, some fun activity that honestly my body couldn't do with my current level of fitness; I'd either beg off due to work or "just not interested" and either try not to take notice when they left me behind, or watch from the sidelines. It got tiresome. I was tired of being the fat, lazy friend who couldn't, or didn't, do anything. I wanted to be able to do those things, too!

I still retain some of my muscularity from high school and some college athletics; I have some residual strength, I just didn't have stamina or endurance for longer aerobic activities. I decided to change that after I got the results from my first annual post-cancer exams that I was clear. Sure, my life was never really in danger, but what better time to make some changes and get a little healthier? I'd heard about the Couch to 5K running plan; I had even sort of started it last winter, but just fizzled. This time, I had determination and desire.

I finished Couch to 5K sometime in August. I don't know exactly when I stopped following the schedule, but since I was feeling good and ready to just keep running on my own time, I took off the C25K training wheels and kept on going. I ran my first 5K race on September 8, 2012, and I ran my second 5K on September 16. My friends and I are planning on running another 5K on Thanksgiving Day and I'm actually excited about it. Since I already know I can do it, I'll be training in the time between now and then to improve my time. I've also moved on to the Bridge to 10K plan and will be looking for a 10K race to run in the spring. Who knows... I even have the idea to run a half-marathon in the back of my head! I'm still considered a beginner runner, though, so I'll consider this the beginning. 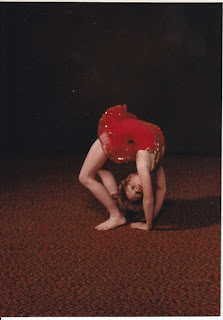 I was a skinny, flexible kid. 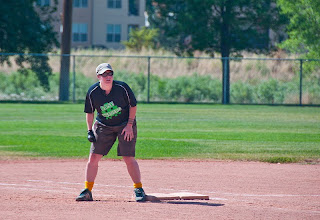 Recreational softball. Yes, it's a beer league. I was red and sweaty and winded that day.
Posted by Kristin at 9:06 AM

Kristin
I live in gorgeous Colorado (although I'm a transplant from Maine) with my boyfriend and a bunch of dogs, cats and lizards. I started running in June of 2012, one minute at a time.